‘His timing is phenomenally captivating’

‘An under-appreciated composer and a likewise pianist, results in pure beauty.’

‘The music making of Kelvin Grout is nothing short of an adventure. With his motto ‘Am I loud enough’ paraphrasing Gerald Moore’s famous book title, Grout’s playing is not that of a servile accompanist. On the contrary, Grout plays like a soloist, with a rich imagination and a multitude of colours. In that respect it’s hard to find his equal.’ Eric Schoones (Editor of Pianist magazine, review Concertzaal NV Breda 11-03-22) 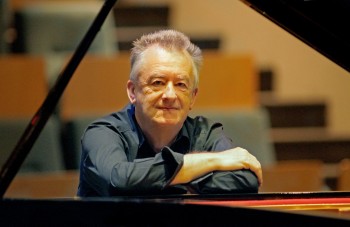 Welcome to the website of Kelvin Grout. Known for his work as a vocal accompanist with many of the world’s greatest singers, and playing piano since he was just four years old, Kelvin is renowned as a pianist who tends to explore alternative approaches to music making.  The press named him ‘Dr Touché’ and ‘The Keyboard Wizard.’ In the last three years Kelvin has returned to the solo recital and this has led him to establish the British Piano Music Society, producing a new recording each year with the less performed piano works from British composers. The first CD with the piano sonata from Frank Bridge gained the very highest critical acclaim from the press and from musical colleagues.

“I have always been fascinated, some would say obsessed, by sound and it’s relationship to silence. For me everything in music is about silence, there is only silence and the placement of sound within that silence. One often hears a quote along the lines of ‘the magic happens between the notes’, but for me that misses the point. Without the silence there can be no music, as without darkness there can be no light. By focusing on the where, when and how you produce a particular sound with silence as the dominant feature, opens you to the possibilities of wonderful peace and transparency in the music.”

“I love performing the great music from Chopin, Liszt and Rachmaninoff etc, but I’ve always had a passion for British piano music, which surely is among the most underrated and intriguing music ever written.  So I am happy to announce a four year project, with four CDs, concerts and lectures, presenting fantastic music from numerous British composers.“

Our new CD with music from William Baines and Arnold Bax has had final editing and will be released in August/September as part of Kelvin’s 70th Birthday celebrations. More to follow!